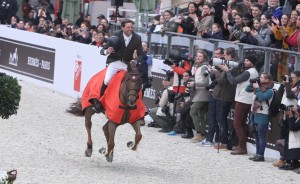 The scenario could not be written in a more perfect way … To end in beauty the Hermes Grand Prix, very well provided, the best riders on the planet riding their best horses. SANTIAGO VALERA ULLASTRES, the new Spanish track designers assisted by GREGORY BODO proposed fluid courses, technically demanding but very respectful of the horses. The riders do non stop praising, the horses, if they could talk, would necessarily agree … The organization by GL Events was again perfect and the house HERMES elegant, refined and welcoming – thank you for the blankets offered at frozen public! Santiago Valera also had a nice word for the volunteers. Congratulations to them! Photo: press conference … 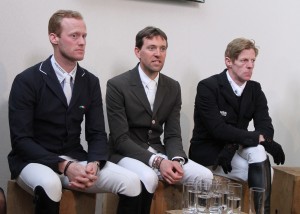 In the € 400,000 SAUT HERMES Grand Prix, 14 couples made it into the jump-off, The spectators were therefore entitled to a beautiful finale with a rather spectacular design. When coming out of a combination, you had to negotiate a very tight turn, “guarded” by an obstacle, to succeed in jumping a wall. If we opted for a large turn, we were out of the game, if we controlled too much we dropped the bars of the combination before. A real Spanish puzzle finally solved by 6 riders, the only authors of a double clear round. 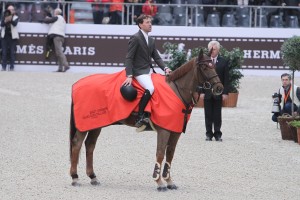 MARCUS EHNING with his CORNADO NRW (WESTF) started first to draw a perfect mastered fluid course. “I thought I was fast but the young people showed me that I was not fast enough,” joked the German champion who underlines his motivation intact for the “Grand finale Parisienne”. Finally he will be 3rd in 35.72 seconds. 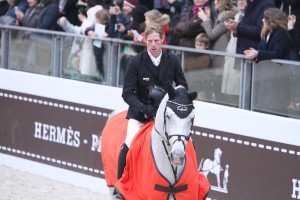 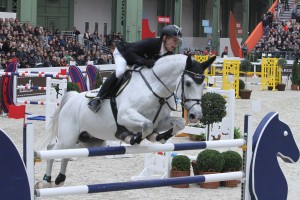 The first pursuers – Peder Fredricson or Harie Smolders can not beat Ehning. PEDER FREDRICSON will finish 4th in 36.46 seconds with HANSSON WL (SBS). 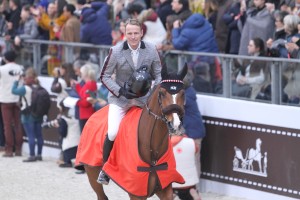 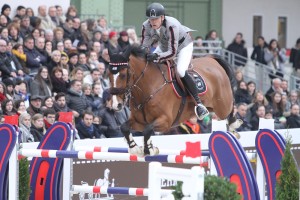 Photos: Peder, his horse and his H & M jacket

SIMON DELESTRE with HERMES RYAN DES HAYETTES (SF) go on the track. (SF). His horse is in great shape, he is able to bounce in a unique way and his small size is perfect to run the milimeter tight turn in front of the wall. His turn is amazing, we say that it will be very difficult, maybe even impossible, to beat him. “I particularly approached the passage of Niels and Patrice,” commented the Cavalier Hermes after the victory. 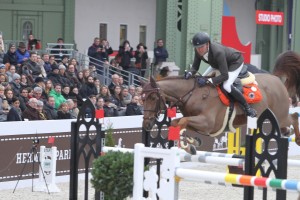 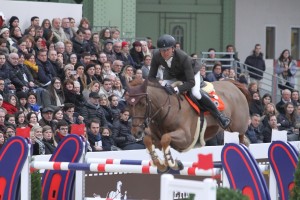 Photo: the winning couple in action!

NIELS BRUYNSEELS has real ambitions for GANCIA DE MUZE (BWP), his generous and fast mare who just won a leg of the world cup last week. And this time again the daughter of Malito de Reve SF, gives everything. “It’s my fault, I badly rode the jump- off, says the Belgian rider. My two turns were not perfect, it cost us the victory … “The couple finished” only “second. We can bet that after the break, we will find them in the Parisian final. 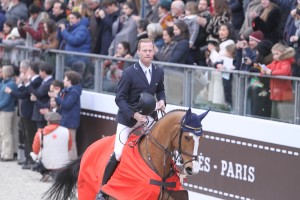 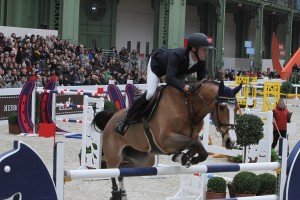 OLIVIER ROBERT with TEMPO DE PABAN (AA) knows that he has no weapons to really fight – so he performs a very nice and fluid aerial tour in 38.25seconds which will bring him a nice 5th place. JANIKA SPRUNGER with BACARDI VDL (KWPN) takes her time on the track by exceeding 45 seconds and she will finish 6th anyway. 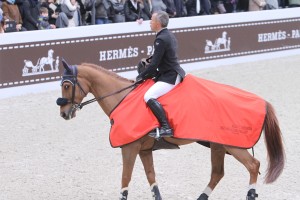 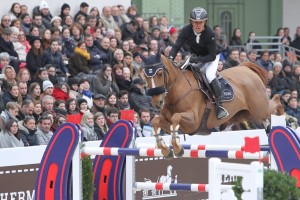 PATRICE DELAVEAU with AQUILA HDC (KWPN) fights like a lion and must take all the risks to try to approach the victory, but the turn in front of the wall is too tight, the jump becomes impossible, the dream of the victory crumbles but the chronometer 34.86 seconds still gives him a 7th place in the fastest 4 points at the jump-off. 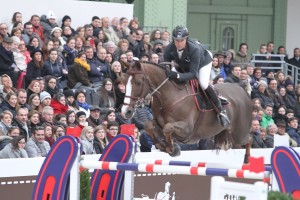 Photo: Janika and Patrice over the same obstacle …

“It’s really an exceptional day and an extraordinary victory for me,” says Simon. The HERMES firm supports Ryan and it’s really the happiness of winning here, in “his Parisian house”. I thank every day for having such a chance to ride a horse like Ryan. It is unique and I will do everything now to preserve it for the biggest sports events like the World Championship or the Olympics games ” 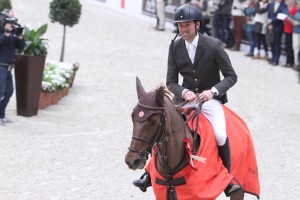 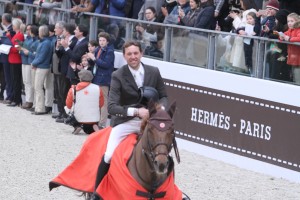