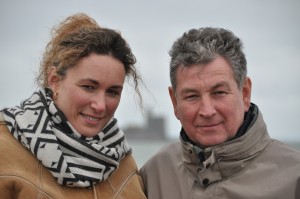 Richard’s grandfather was a stud owner in draft horses. With the director of the stud farm of Saint-Lô at that time, they began the transformation of workhorses towards more lightness by crossing light cobs and trotters with thoroughbreds which finally resulted, after the war, in the appearance of the sport horse. Richard’s father was first and foremost a horse dealer, at that time, farmers sold their farm horses to buy tractors. He had a passion for équitation, horseback riding to participate in competitions organized by rural horse companies.

The passion for breeding came with Richard – the stud farm in Couvains was bought for this purpose in 1989. He started with his three good mares and then, with the development of the technique of embryo transfer, he had access to very good genetics. 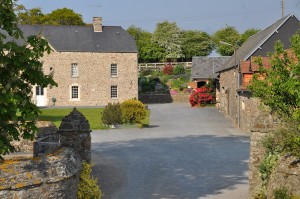 THE TECHNICAL REVOLUTION OF BREEDING HAS BEGUN IN NORMANDY

Haras de Semilly was the first, along with the Pignolet family, to develop the use and commercialization of the embryo transfer technique on horses – they worked with the agricultural cooperative that practiced it on cattle. The INRA researchers did their tests in parallel but it is really here that this practice was made available to the breeders and gradually developed. The transfer of equine embryos has become commonplace throughout Europe and all around the world.

IN BREEDING, WE PRIVILEGED THE NATURE INSTEAD OF INJECTIONS

For several years, Haras de Semilly has been the largest French center for equine reproduction. On average, 700 mares pass through the stud during the breeding season. 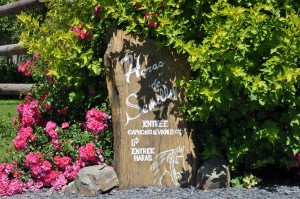 “We are often called at the end of the season” as a last chance “. We have a very good success rate of filling and thankfully, because of all the sacrifices we do ourselves… The secret of success is simply, respect for nature. Mares are often out of order, nothing works normally. The causes are many: some do not have a normal life for a mare – confined in the stall, with blankets, without contact with the congeners. Others have been deregulated by too many injections of hormones to trigger heat, to precipitate ovulation … It can work at first, but after we disrupt everything. We spend our time reprogramming them naturally. They are put on the grass – it is a very important element with the sun because they bring a lot of essential vitamins – and in a herd of horses they will better make cycle each other. They are teased by a pony – while in general they do not see the shadow of a stallion. We observe them and we check them regularly. At the end of the cycle, the ultrasound rhythm accelerates so as not to miss ovulation: every day and late at night if necessary with the help of a good team of veterinarians and we inseminate close to ovulation trying to avoid the use of hormones injections. This is a lot of work because with some mares it can take a lot of time, but do not be in a hurry if you want good results, especially when we are asked to inseminate with a single straw DOSE! With fertile stallions like Diamond it’s not a problem but with some others it’s a lot more complicated! It has also been noticed that the sons of fertile stallions are often fertile too, it is a quality that is transmitted. Freezing techniques are also very important – with Eurogen we have developed an excellent technique that allows us to earn points in post frozen sperm”

THE MENTAL BEFORE EVERYTHING

“Thirty foals are born at farm every year, which is not huge. Some French breeders give birth to the double, not to mention Paul Schockemölhe who makes hundreds. So we are not a big breeding in quantity of production. We try to bet more on quality.

For crossbreeds, the criterion of quality which for us is the most important and with which we started with note first stallion, the Tot de Semilly, it is the MENTAL. Even the best horse with all the strength and technique, if he does not want to do well, he will not do anything. Brave horses are needed and that is why the Normand strains are appreciated, because at their origins there are working horses and the peasants kept only the working horses which accepted very hard efforts. The SF are therefore known as easy and courageous and as such appreciated by foreigners. 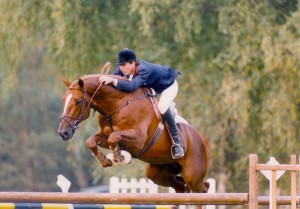 In the old times we were pretty much the only ones to believe in The Tot. The breeders preferred Narcos, which had to be booked a year in advance. In hindsight, we were right to believe in Le Tot, who, because of his strength, his good balance, his natural respect and his simplicity, was revealed, despite a model that some people thought was too massive, a purebred leader.

The breed has evolved very quickly, now we look for modern horses, light, with a lot of energy, a good technique, respectful. And respect is innate. Today, even in amateur events, if you have slow and heavy horses, there is no competition. The courses are getting faster, the obstacles getting lighter, so you need electric horses that react to the slightest solicitation. But it is true that the excess of this reactivity makes that they can be easily scared and spooky and stop or be too difficult to control. The right mesure is very difficult to find and that is why exceptional horses are so rare. ”

“How to say … It was like a car with one more speed. He had never done a refusal on his life. Even in the worst situations, he was always present, he had strength and a super mental. 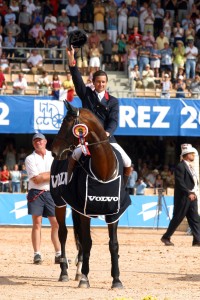 We still remember the video of the World Equestrian Games video in Jerez in 2002 when he became the World Champion. There was the water and then a very big oxer with a very delicate number of strides. They arrived completely in the foot of the oxer and normally, 95% of the horses would have stopped or crushed in to it. But he did not: he jumped and did everything not to touch, while it was almost impossible. 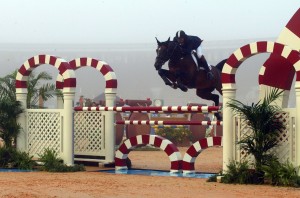 He passes on his qualities to his production and it is no coincidence that he was the best stallion in the world for 2 years in a row and still second this year. Given the regularity of its production and the quality of its new generations coming, it will probably be among the best for several years. In addition we are lucky that it is always so fertile. It is really a supernatural phenomenon in every way! 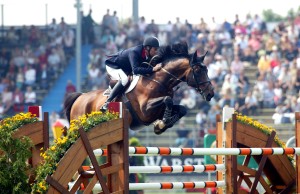 DIAMAND AND ERIC in Aachen

Some people said it was naughty stallion without knowing that he was orphaned and bottle-fed. If he had had a mother, he would have been like a normal and very nice horse like his father was because he also transmits an excellent character to his products.

He was fed by Richard and an employee at that time – every two hours day and night. He was walking freely in the yard and coming to the window to take his bottle. Today we won’t do not do it again. In a case of misfortune like that it is absolutely necessary to find a surrogate mother. A foal bred alone has no codes, no education and quickly becomes unmanageable. We have seen some cases even worse than Diamond while he is an stallion! 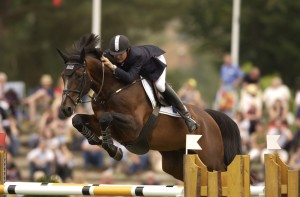 DIAMAND AND ERIC in Donaueschingen

Despite his triple colic operation in 2008, Diamant has recovered well and has a very pleasant life. He goes every day to the paddock (he has 10 at his disposal!) And has a meal more in the day and in the evening, in boxing, as he must not eat straw or shavings,we made him a rubber mattress with air underneath. A 4 * hotel! 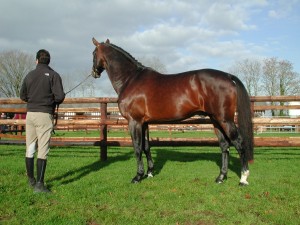 THE STALLION AND HIS RIDER

STALLIONS IN PLETHORICAL OFFER AND BREEDERS MORE AND MORE LOST

“The catalogs of stallions are becoming more beautiful and more and more provided but it is increasingly difficult to make new crossings and to break in new stallions. This is worrying for the future of French breeding. Abroad, the stallions of 2 and 3 years approved breed more than in France and it is thanks to their good test on progeny that people realize the qualities of their production and that they can hope to break through . Young French stallions are breeding 20-40 mares which is not significant and breeders prefer foreign stallions to fashion. Fortunately, foreigners are looking for the original SF! In competition, the French blood is also appreciated. 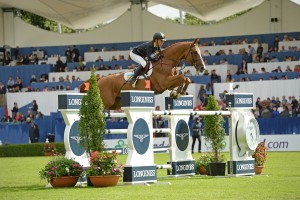 On our side we relativize the fashion and we follow our idea for our own breeding, but we agree that to get a young stallion out of the lot, we must create a fashion, a desire. 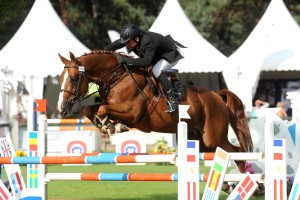 The opening abroad is a good thing if you import the best and if you mix it with French blood. The problem is that when they are very good it is difficult to have them in France, but if you import what they do not want anymore, we risk to degrade the breed. However, the majority of breeders do not know what is the true quality of all these imported stallions. If they produce medium foals, hard to be sold, they will disgust the breeders and stop using them. 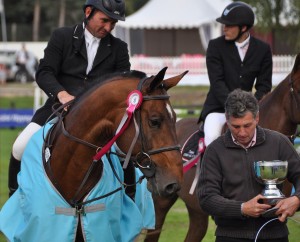 ROCK’N ROLL SEMILLY the Champion of 6 years at Fontainebleau

The Saint-Lô Stallion Show is a magnificent storefront. It is the largest show in France and Europe. There are many foreign visitors. The site is perfect and the show is very well organized, so it is a major event for all professionals and enthusiasts of breeding. What bothers me is the way the stud owner present their horses. It’s good to know how to present and praise the merits of each stallion, it makes show too, but if you say anything it’s a shame and lie to the breeders to sell the coverings it really bothers me. 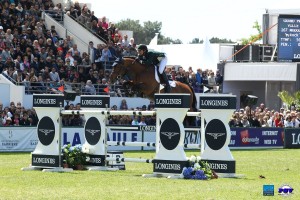 ANDIAMO FOR THE FUTURE 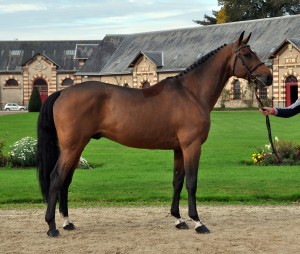 Andiamo Semilly is the one who stands out the most in our group of young horses. It presents the qualities of Diamant but in more modern, more sport. His maternal line brings back the blood of Rantzau, which is a very good asset. He transcends himself on the ring. He is an easy horse, brave and intelligent: a sport horse par excellence. 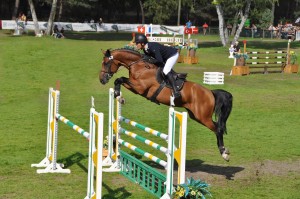 And there are of course all the others young stallions, we believe in too. 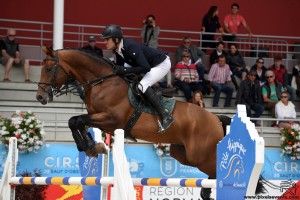 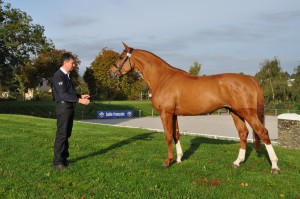 AWAY SEMILLY PRESENTED BY HIS BREEDER

AWAY SEMILLY WITH OLIVIER MARTIN in Fontainebleau 2017

Captain Semilly with his beautiful model, his strength, his flexibility and a lot of charisma. For now, he has trouble focusing himself on competitions because he has a lot of blood and the covering turns his head a little. We must give him time. I am still thinking of Papillon Rouge, who has never done anything until age of 8 and who has revealed himself afterwards. In our profession we have to know how to adapt to each horse and also to be patient … ” 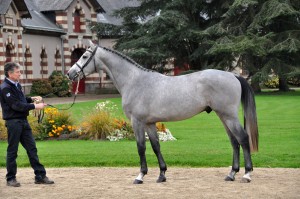 CAPTAIN SEMILLY PRESENTED BY HIS BREEDER