After being crowned the Champion of Male Selle Français 2 years, Cher Epoux, son of Network PS returns to the front of the stage to become the Champion of France stallions 3 years. The competition was tough, but this SFO (Selle Français Original, without addition of foreign blood) was able to overcome thanks to his consistency: 17.3 in Model, 16 for Gaits 16, 17,75 for the jump with a rider and 17, 25 for the free jump – a winning score of 17.27. Photo: Champion 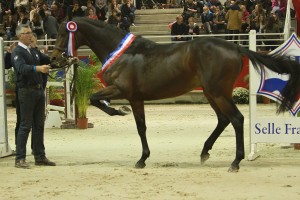 Cher Epoux was born in the stud farm of Sylvie Bouchanville in St Ouen sur Loire (58). The breeder and owner is very happy: “Cher Epoux remained very consistent over the three workshops and I think that’s what allowed him to win the championship. This year, we really wanted to protect him without asking too much work on the bars. It’s been one month he jumps with a rider and it has always been relatively easy. It is true that since he was born we believe in him! We had 7 pm transportation to come to Saint-Lô, and it has absolutely not changed. You can really say that we are not here for nothing, we are very excited!
Competition was quite tough – Cash du Plessis (Orient Express and Embleme du Plessis by Rosire) arrived second with the note of 17.26. Cash du Plessis, the son of Orient Express HDC was born at André Chenu stud-farm in Mesnil Mauger (14). Photo: the son of Orient Express

Captain Semilly (Nartago and Ebene de Semilly by Tot de Semilly), a beautiful gray horse with a realy nice model, born at Richard Levallois stud farm, is third with the overall score of 16.99.

In fourth place judges placed Captain Rumel (Vagabond de la Pomme and Qrinoline Rumel by Dollar du Murier), born at stud farm Rumel in Poigny Forest (78) in partnership with the Haras de la Pomme, denoted 16, 91. This is the stallion that has most impressed the audience by the quality of his jumps. Photo: the son of Vagabond de la Pomme

During these Finals of stlions Selle Français 2015, 31 males got their approval as a standard, they all received an overall score higher than 16/20.